Conservative Member of Parliament for South West Wiltshire
Dr Andrew Murrison was born in 1961 in Colchester. Studying at Bristol and Hughes Hall, Cambridge, his 1995 doctoral thesis was entitled Studies into the Neurological Consequences of Diving he was awarded the Gilbert Blane medal. Andrew served for 18 years as a Medical Officer in the Royal Navy, leaving in October 2000 as a Surgeon Commander. In 2003 he was recalled to serve in Iraq.

Andrew was elected to Parliament for the then Westbury constituency in June 2001. Since the 2010 General Election he has represented the newly-created constituency of South West Wiltshire. In November 2003 he was appointed to the Conservative front bench as a health spokesman, transferring in July 2007 to defence.

In May 2010 Andrew became Parliamentary Private Secretary to the Secretary of State for Health and was asked by the Prime Minister to review and make recommendations on healthcare for members of the Service community. The principal recommendations in the subsequent reports ‘Fighting Fit’ and ‘A Better Deal for Military Amputees’ are now being implemented by the Government. His book The Military Covenant was published in June 2011. In November 2011 Andrew was appointed by the Prime Minister as his Special Representative for the Centenary Commemorations of the Great War.

On the 5 September 2012 Andrew was appointed Minister for International Security Strategy and transferred from Defence to the Northern Ireland Office in the Prime Minister’s reshuffle on the 15 July 2014.

In June 2017, Andrew was re-elected as the Member of Parliament for South West Wiltshire by a majority of 18,326.

Married to Jenny, Andrew lives near Warminster with their five daughters and dog Buster.

Last week, Health Secretary Steve Barclay detailed support being rolled out by the government to give further support to the health and s

MPs OBJECT TO IMPROPER USE OF CLEAN AIR ZONE

Wiltshire MPs Andrew Murrison and Michelle Donelan have written to the Secretary of State for Transport, Mark Harper, to object to the im

Dr Andrew Murrison has written to Neil O’Brien MP, health minister responsible for dentistry, following his visit to a dental practice in

ANDREW SPEAKS OUT AGAINST WESTBURY INCINERATOR AT PLANNING INSPECTOR'S HEARING

SAVE THE DATE for TECH TROWBRIDGE

Andrew Murrison, recently reappointed as a defence minister by PM Rishi Sunak, has been representing the government at Remembrance in the

ANDREW BACK AT MOD

Andrew was appointed Minister for Defence People at MOD yesterday (Sunday) by Prime Minister Rishi Sunak.  It is Andrew's second stint as

ANDREW WRITES TO SCHOOLS ON HELP FOR YOUNG PEOPLE 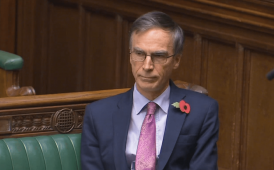